How to start-up when you are a non-tech founder 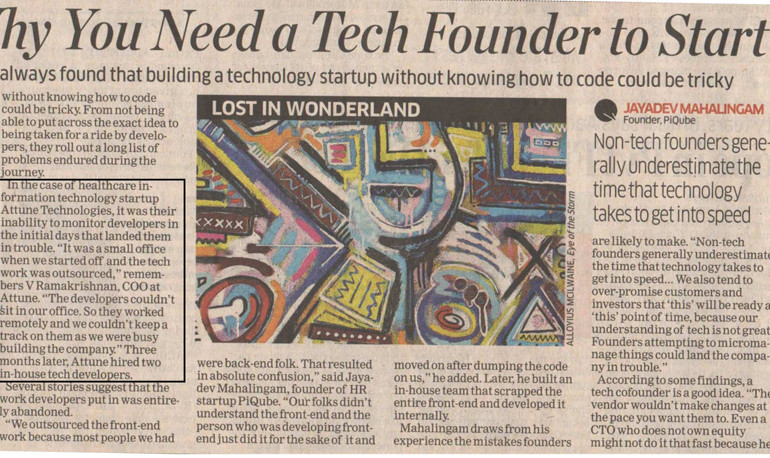 CHENNAI: When Vinit Srivastava decided to start DriversKart, an app that provides drivers on demand, it was a roller-coaster ride for him. Lacking technological background, he approached a developer in Bengaluru to build the platform — but the developer delivered a substandard code. As huge prices were demanded to make changes, Srivastava approached another developer in Pune.

“This time we thought we shall give a timeline to the vendor and define at each stage what we wanted. But he kept prolonging the project because he was being paid on an hourly basis,” recalls Srivastava. The company then figured out a technology partner, Kaay Labs, which now works with it on a Build-Operate-Transfer model.

Non-tech founders have always found that building a tech startup without knowing how to code could be tricky. From not being able to put across the exact idea to being taken for a ride by developers, they roll out a long list of problems endured during the journey.

In the case of healthcare information technology startup Attune Technologies, it was their inability to monitor developers in the initial days that landed them in trouble. “It was a small office when we started off and the tech work was outsourced,” remembers V Ramakrishnan, COO at Attune. “The developers couldn’t sit in our office. So they worked remotely and we couldn’t keep a track on them as we were busy building the company.” Three months later, Attune hired two in-house tech developers.

Several stories suggest that the work developers put in was entirely abandoned.

“We outsourced the front-end work because most people we had were back-end folk. That resulted in absolute confusion,” said Jayadev Mahalingam, founder of HR startup PiQube. “Our folks didn’t understand the front-end and the person who was developing frontend just did it for the sake of it and moved on after dumping the code on us,” he added. Later, he built an in-house team that scrapped the entire front-end and developed it internally.

Mahalingam draws from his experience the mistakes founders are likely to make. “Non-tech founders generally underestimate the time that technology takes to get into speed… We also tend to over-promise customers and investors that ‘this’ will be ready at ‘this’ point of time, because our understanding of tech is not great. Founders attempting to micromanage things could land the company in trouble.”

According to some findings, a tech cofounder is a good idea. “The vendor wouldn’t make changes at the pace you want them to. Even a CTO who does not own equity might not do it that fast because he has nothing to lose but a job. But if you have a tech cofounder who has some equity, he will do whatever it takes to make sure it excels,” suggests Antony Kattukaran, founder of SaaS enterprise startup Tagalys.

However, he adds that to hunt for one would not be the right way to do it and suggests it has to happen along the journey. Antony considers himself lucky to find a tech cofounder who was initially his vendor, but advises other tech product startups against outsourcing their work.

“The biggest problem among founders is that they never know what they really want,” said Dorai Thodla, entrepreneur and mentor. They have some broad idea and want to see something developed. When they need changes, developers allow it to some extent because they would have budgeted for it, but after that it becomes difficult for them and they start asking for more money.”